We had a bunch of chores we needed to get done on Memorial Day, so after sleeping late, catching up on uploading photos to Flickr, and having lunch, we went to a bunch of stores in Washingtonian Center, which was pretty crowded with people at the Kohl's and Target sales (we avoided those) but lovely around the lake, where only the playground had a lot of people. It was as gorgeous a day as the previous two this weekend, and to my delight we saw not only the goslings I'd spotted a few weeks ago, who are now in the awkward adolescent dinosaur phase, but a new Canada goose family with at least ten babies! 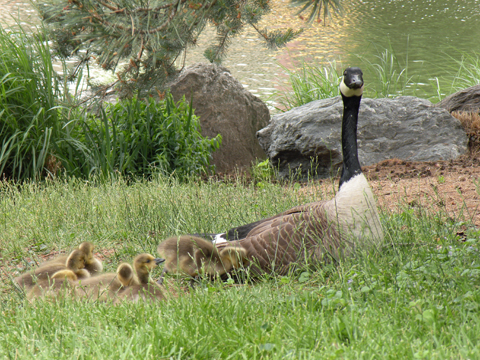 The Orioles beat the Nationals, which I'm sure neither my parents nor my in-laws are happy about, but I am (for Father's Day we are going to see the Orioles-Red Sox game in Baltimore, where Adam and I may be the only Orioles fans in our group of 8). We had homemade pizza for dinner -- which I had nothing to do with making -- and ended up watching South Park because they were rerunning the one where Obama and McCain only ran for President so that no matter who won, they could steal the Hope Diamond with the help of British criminal genius Sarah Palin. Hope everyone had a relaxing Memorial Day!
Collapse