On Friday it was just as horribly hot as Thursday. I have no energy in weather like this, and I lost an enormous amount of my day when Daniel installed our new, (supposedly) improved router, which works fine with my laptop but which my desktop absolutely refused to acknowledge until about 20 reconfigurations, new drivers, reboots, altered settings, etc. About the only other thing I got done was a review of Deep Space Nine's "Rules of Engagement" which I couldn't post till evening due to the router wrangling.

After school, Adam ran an eight-mile Burrito Run in which everyone races to Chipotle, eats a burrito, and runs back, so he ended up collapsing early in the evening right after dinner. The rest of us watched the first two episodes of the second season of Case Histories, the terrific Jason Isaacs show set in Scotland that always depresses me -- lots of death even in stories that don't start out being about murders, and it's like he needs to be around other people's pain because he can't cope with his own, but the acting is phenomenal. Some more of the Virginia Renfaire: 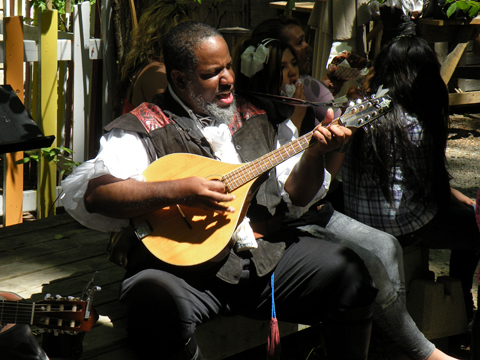