The first day of June was in the 90s, right on schedule...well, except that it was in the 90s the previous couple of days, too. Adam went to volunteer at the DC Folk Festival at Glen Echo, which the rest of us will be attending on Sunday; on Saturday, the rest of us went to Target (among other things, Daniel needed a new bathing suit and slippers, and I needed socks and The Next Three Days on DVD).

Then we went to Homestead Farm to pick strawberries. It was quite hot to be out in the sun, but not crowded, and we got to see the goats and chickens before walking out to the strawberry fields (since it was so hot, we ended up taking the tractor back to the store). We had to stop at the food store as well on the way home, and we had breakfast food for dinner (pancakes, meatless bacon and sausages, etc.). 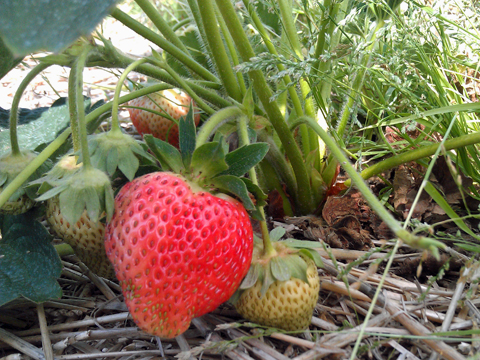 Courtesy a neighbor, we watched a couple of episodes of Arrested Development, which I am still loving, then we watched Hysteria, the invention-of-the-vibrator movie, which is pretty hysterical (in the good way, not the ridiculous medical diagnosis way). I should admit that I know Howard Gensler, who wrote the story upom which the film is based -- a fellow Daily Pennyslvanian alum -- but it's a great script, great cast, great entertainment!
Collapse