Another quickie because I have been having fun with

dementordelta all day! We ordered pizza and watched Hysteria (because 19th century orgasm research is FTW as is Rupert Everett), For the Moment (for which I thank

evildrem who sent it to me long ago, in my first flush of Russell Crowe love, and I forgot I had it until we realized we had never seen it -- it's quite good and Russell looks quite good in it), and the 10th anniversary Les Miserables concert (I confess that now I understand the Quast love, though it's because we looked up Quast on YouTube and heard him do "Some Enchanted Evening" and play Peron in Evita less than from his Javert).

apaulled came home and made dinner for us, then we went downtown to see Christopher Plummer at the Shakespeare Theatre, where Michael Kahn was discussing his career and classical drama with him (we were in the second row, has phenomenal seats and may have been recorded on film). He was brilliant and hilarious -- funniest stories were about excess drinking at midday before a performance, Laurence Olivier taking the Freudian approach to Othello and kissing Ralph Richardson, and federal agencies having to be consulted before he could be a nearly-bald Klingon with an eye-patch. No pics were allowed during the event; here's a prop pig and the company's Tony Award! 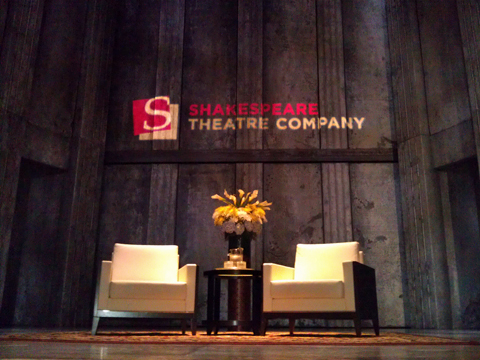