I spent Tuesday catching up from Saturday, Sunday and Monday -- had a whole bunch of writing to do and a whole bunch of laundry to do, and I only got half of each done. I had promised to take Daniel out for lunch, but by the time we had both gotten enough done to be ready to go, it was nearly 3 p.m. and we decided to eat leftover pizza and go out another day. Adam came home relatively early, since it's his last week of school, and pondered what he can bring to the AP World History class party (he wanted to bring either Hitler or Stalin's favorite food but couldn't get a definitive answer in either case, thank Wiki).

The weather, at least, was gorgeous, and I saw at least three bunnies while out walking (it might have been four but one might have crossed the street). We had molé barbecue for dinner -- I think it's not supposed to have the accent but I'm not risking people thinking I ate a mole -- watched some Arrested Development and Monday's Warehouse 13 (yay Jaime Murray), and celebrated the Orioles' victory vicariously since the game was not on any of our cable channels. Here are some photos from the Washington Folk Festival on Sunday -- I forgot my SD card so I too very few pics, mostly Jennifer Cutting's Ocean Orchestra! 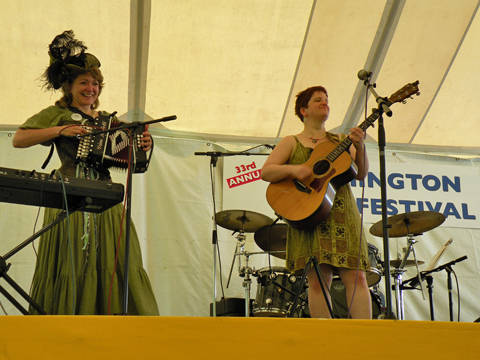