We spent nearly all of Saturday at the National Zoo! We went first to see the Andean bears, since there are two cubs who are only outside in the mornings (or until they get exhausted, since it was after noon when we finally stopped watching them being adorable). Then we went to Amazonia, the invertebrates (where there were World Oceans Day displays outside, since that was Saturday too), the American trail, the great cats (near whom we had a picnic), the bird house and flight exhibit, the Asian trail, the elephants, and pretty much everything else except the small mammal house since it was crowded and we were tired!

Despite sunblock, I seem to have managed to get a bit sunburnt over the past couple of outings. In keeping with the World Oceans Day theme, we had veggie fish sticks for dinner, watched the final episodes of the new season of Arrested Development (after the cliffhanger they better give us more), then watched the last episode of Spies of Warsaw, which despite some very good actors really has not held my interest and I doubt I'd pass a quiz on what happened in it. Here are some quickly cropped photos of the Andean bear mother and cubs -- sadly, the father died before they were born: 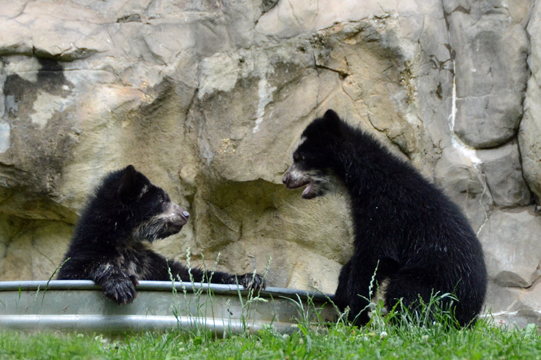