We had pouring rain for most of Monday which helped give me a migraine when I woke up, so I was slow to get going, but I ended up getting a lot done. Paul worked from home until he had a dentist appointment in the afternoon, so we all had lunch together, then I went to do my kids' favorite thing -- take them clothes shopping. Adam drove us, first to the mall, then on the highway to Kohl's during the brief period when it was not raining. He got pretty much an entire new wardrobe and did fine merging across several lanes to get back on the highway; Daniel just got new khakis and polos, but managed to survive even Nickelback on the Kohl's sound system. And I found a cute shirt for $9, plus I got Paul a new belt for Father's Day since his is falling apart, so it was all good.

There was a special on the Science channel on Cicadas and Invaders that the University of Maryland entomologist who was on The Tonight Show with Russell Crowe the other day was on, so we watched that -- lots of other swarming animals, bats and birds and fish -- then we watched this week's Warehouse 13 with Steve's hot ex. Now I am waiting for Russell on Late Night with Jimmy Fallon. Here are some photos of one of the coolest things at the National Zoo -- a flock of wild black-crowned night herons who have been migrating to spend the summer in the trees near the zoo's bird house since the 1970s, when there were herons in the outdoor flight cage and the wild herons heard them and decided the zoo would be a good place to nest; now the zoo feeds them to stop them from stealing food from the rare birds: 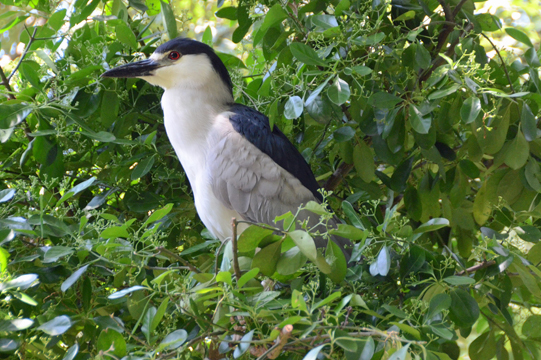