The weather on Friday was so gorgeous that it made up for the rest of the week. I saw six bunnies in the neighborhood, including one sitting on our front porch munching what's left of the azaleas plus two babies, and my parents had a deer munching in their backyard during dinner while we were eating seafood (and fake seafood) au gratin. Earlier Daniel went bowling with my father and Adam went running. I wrote a review of Deep Space Nine's "Shattered Mirror", probably the weakest of the crossover episodes, though I forgot to post it until 11 p.m.!

A generous soul shared with me the episodes of Vicious, the Ian McKellen/Derek Jacobi comedy, so we watched the first three, which were hilarious. Then younger son went to talk to his girlfriend on the phone and the rest of us watched this week's Graham Norton Show, which was hilarious -- Russell Crowe explaining that Cate Blanchett has replaced Jon Polson as his favorite screen kiss, Amy Adams explaining that she isn't really stalking Henry Cavill, Henry Cavill explaining that he does not look like Superman with his shirt off unless he's getting paid to. Crowe got to man the red chair and dumped people with aplomb!

Here are a few photos of the red pandas at the National Zoo last weekend, moving quickly and not in the mood to pose: 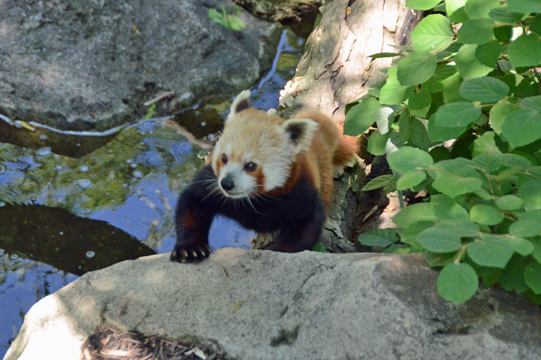