We spent Father's Day in Baltimore, though some members of my family enjoyed it more than others -- we picked my parents up Sunday morning and met my in-laws at Camden Yards for the Orioles-Red Sox game, which the Orioles won 6-3, to the chagrin of Paul's and my father and the delight of most of the rest of us (the fact that the Nationals lost did not improve my father's mood). The weather was lovely, though -- humid but not too hot and it didn't rain -- and the Orioles looked good! 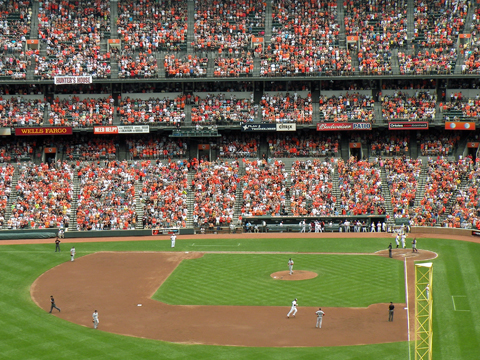 We said farewell to my in-laws in Baltimore and drove home with my parents, then picked up a pizza and ate that along with the Reese's peanut butter cup cheesecake that Adam spent last night making -- despite his concerns about having used too much whipping cream, it was delicious. After he drove my parents home, we watched Doctor Who's "City of Death," in part because older son had read that John Cleese was in it -- Romana's not my favorite but it's fun to see the Fourth Doctor in Paris!
Collapse