I had a pretty quiet Tuesday involving laundry (four loads washed and dried, not yet folded; Adam ironed his own shirts) and taking Adam for a drive, something likely to happen frequently until he has the 60 hours he needs to get his license. (Daniel appears to be in no hurry to do the same.) We stopped at the bank and the UPS store and did a long loop paralleling the C&O Canal in the rain, and he only bumped the curb once, when three police cars with their sirens on went zooming past. Paul worked from home because his office's air conditioning was not working, so we all had lunch together.

Delta and I were discussing the other day how there are lots of Les Mis memes involving Mean Girls references because of Amanda Seyfried and I had never seen it so I didn't get half of them, then I discovered that Tuesday was the last night it was free On Demand on Showtime. So we watched it, and I actually howled through the whole thing -- partly because I knew about half the lines from memes, partly because we all know a Regina, though it stole its best aspects from Heathers and Cruel Intentions. Here are some photos of the cicadas at Gunston Hall last weekend -- Brood 2 is about to disappear for 17 years! 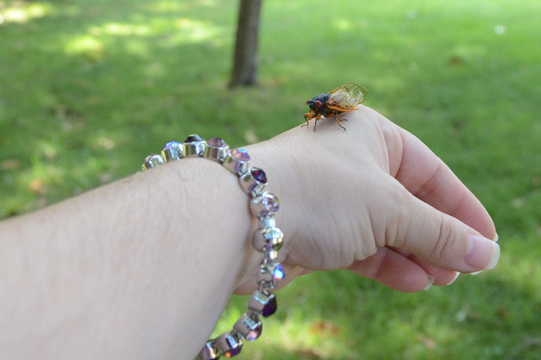