The pattern of this part of summer is having no pattern -- doing work in between doing stuff that needs to be done at home, having fun with kids, being informed by kids that I fail at pretty much everything. Today Adam drove me and Daniel to CVS to get what was supposed to be a couple of things except then everyone remembered they needed toothpaste and shampoo and mouthwash and exciting stuff like that, then since we were already out and he needs driving hours, Adam drove us to the mall to get froyo and peek at the sales rack in Old Navy. He can now tie multiple knots in his neckties, too. Where is my hippie child?

It was a record bunny day -- seven! (Three babies, two medium bunnies, two big bunnies including the one that sometimes jumps on our porch.) No deer, but lots of chipmunks, including the one that comes onto the deck to steal fallen birdseed and bother the cats. We watched the DS9 episode I need to review this week, then we watched the Graham Norton episode I'd already seen online but wanted to record with the music and video clips intact; Amy Adams was not allowed to swear on BBC America but Russell Crowe still got to discuss the size of his action figure. From months ago, the Brookside Gardens ikebana show: 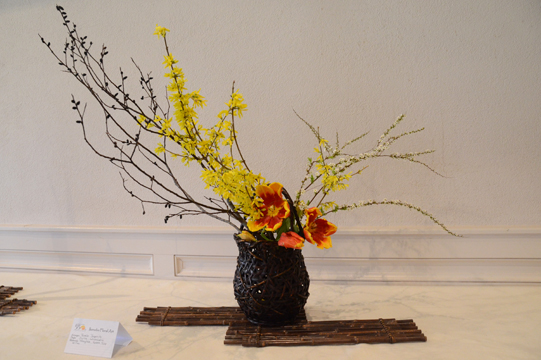 Have a joyous summer solstice!
Collapse