Comcast is being uncooperative about letting me stay online consistently so I will be very brief. We had a quiet Saturday morning reading and watching the squirrels on the deck annoy the cats. Then we drove Adam to work at Glen Echo Park since his bike chain is broken, went to pick up a self-cleaning litterbox that someone was freecycling (in a house with a yard that had two bunnies munching the grass), and came home to get Daniel.

From there we went to Poolesville to the Kunzang Palyul Choling Temple's Garuda Aviary, a sanctuary for abandoned and abused parrots, some of whom have outlived their owners (the birds can live to be 80) and some of whom were horribly mistreated by people who either didn't know how to take care of them or couldn't take their loud noises and occasional biting. The aviary was having a fundraising gala with live music and vegetarian food. 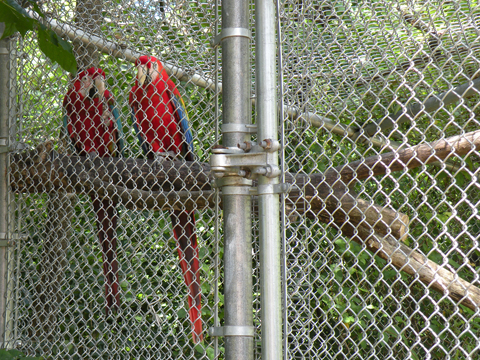 We had veggie shawarma for dinner, after which I was going to put on Amadeus because I had Mozart's 40th symphony stuck in my head. But I was overridden by family members who wanted a comedy, so instead I subjected them to Kate and Leopold which I recently found really cheaply on Blu-Ray. The consensus is that the script is silly but Hugh Jackman is dressed really well (at least, the member of the family who cares about that thinks so).
Collapse