We had August weather on Monday even though June isn't over yet -- extremely hot, extremely humid until just now when thunderstorms hit and now it's very slightly cooler but very wet. Paul worked from home because a guy was coming to check out the recently broken garbage disposal (which we ended up having to replace due to a partially shredded measuring spoon embedded in the motor); Adam worked in our neighbor's yard in the morning; Daniel went out to lunch and to play miniature golf with my father.

In the afternoon I was out with Adam to take his bike to the shop so the chain can be fixed (as it turns out, it needs lots of bits tuned up and won't be finished for two weeks). While we were driving so Adam could get some practice in,

wolfshark called to see if we wanted to meet for dinner at Lebanese Taverna. So I went home, left Adam to go to track practice, picked up Paul, and went to meet Sharkie and her husband, who showed us their awesome Alaska photos when we didn't have hummus on the table.

When we got home, I decided it was time to test our new bargain Blu-Ray of Shakespeare in Love to make sure Colin Firth and Geoffrey Rush looked as good as ever (mmmmm, they did, though Daniel for whom we brought back shawarma declined to watch with us and Adam mocked most of the movie). This was less stressful viewing than the news at least; Massachusetts did a good job electing a new senator but don't get me started on the Supreme Court. Here are some photos of tulips from Brookside Gardens and DC in the spring: 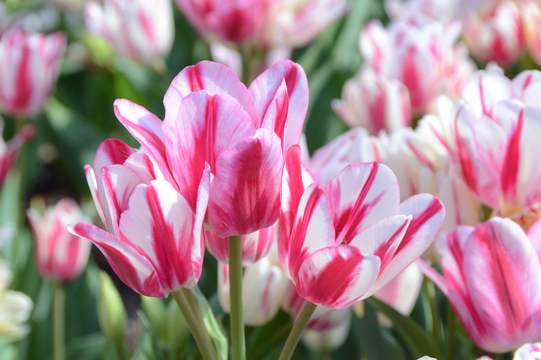