We dropped off Adam at Glen Echo to work and went to downtown Rockville on Saturday for Montgomery County Heritage Days, which this year are celebrating the 150th anniversary of the Civil War, in this case with a reenactment of the day when Confederate General J.E.B. Stuart invaded Rockville en route to the Battle of Gettysburg. We got cold chocolate drinks and went to Beall-Dawson House, which had craft demonstrations, the Washington Revels, the Federal City Brass Band, and several reenactors, then we went to Courthouse Square to see J.E.B. Stuart ride into Rockville and capture Union soldiers: 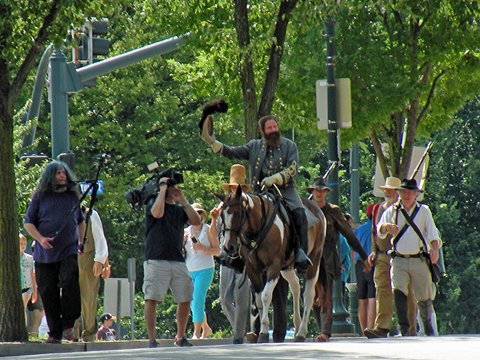 After the raid, we went to pick up Adam, then came home so he could make brownies to bring to my cousin's house where we will be having lunch on Sunday after the unveiling ceremony at Aunt Shirley's grave. In the evening, after having my first five suggestions rejected by Adam and Daniel, we ended up watching GoldenEye, which neither of them remembered and I haven't watched in probably a decade -- I'm not a big Bond fan whether it's Connery or Craig, but I have nostalgic affection for The Spy Who Loved Me, and I can watch Brosnan and Bean in anything, especially breaking each other's hearts.
Collapse