It's feeling like...well, July, hot and muggy with periods of rain. My father came looking to have lunch with Daniel in the late morning and we all ended up going to Bagel City, where I had intended to take the kids anyway since we needed bagels and spreads. Then we came home and I folded laundry and watched The Fountain -- the movie in which I first realized Hugh Jackman could really act; previously I'd only seen him in big action films -- which remains extraordinary.

It was drizzling by the time I took a walk, which soon turned into actual rain, though I saw three bunnies hiding under bushes and a deer in the woods. We had quesadillas for dinner, then watched PBS documentaries on the Statue of Liberty (an early Ken Burns film, and excellent) and Mount Rushmore and Borglum, who was quite an egotist. Here are some photos of the cardinal pair who frequently appear on our deck, much to the chagrin of our cats: 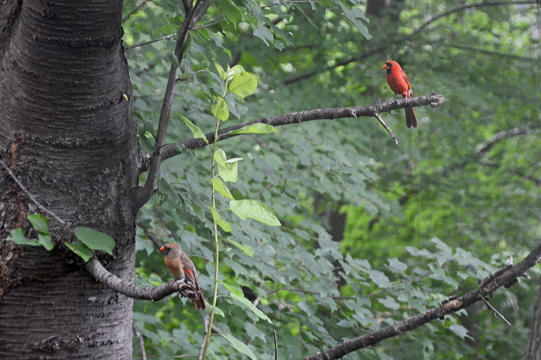