It poured for nearly 24 hours straight. I was woken up several times during the night by thunder, then rose to a very dark, rainy day. I spent the morning working on a review of Deep Space Nine's "The Quickening" and trying to recover from the glory that is Sharknado. Adam and my father were going to play tennis but it was raining much too hard, so they went out to lunch instead. Daniel was chatting live online with people playing Cube World until I dragged him down for lunch.

I did various work and chores, we had dinner with my parents, then we decided to watch The Patriot in spite of the Mel Gibson factor because the kids had never seen it and it also has Heath Ledger, Jason Isaacs, Tom Wilkinson and many other good actors. Both kids felt it was too long and suffers from the same problem as other Roland Emmerich historical films, namely WTF WHEN DID THAT HAPPEN. Some pics from the National Geographic Museum's 125th anniversary exhibit: 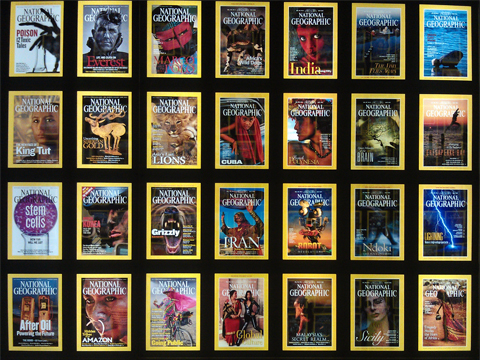