Yes, I know Pound was an anti-Semite and arguably a misogynist but he's dead, therefore I feel that his work can be evaluated on its own merits or lack thereof. Unlike Orson Scott Card, who is very much alive and giving money to organizations that support denying gay Americans their rights and support foreign governments that support incarcerating and in some cases executing gay people. I don't care how great a work of art anyone thinks Ender's Game is or whether it can be read as a subversive plea for tolerance: if it's a box office hit, Card will get MORE money to give to more organizations that believe in punishing people for having different beliefs than Card does. When he's dead, we can talk about the merits of his work. For now, there's no way I'd see Ender's Game and I don't care what awesome actor is in it or how boundary-breaking or whatever. Er. Yes, I appear to be in rant mode still.

I am Zimmerman-ed out from Facebook (have surpassed my previous single-day total for defriendings and that was only because I didn't keep everyone I knew from Superpoke Pets after it shut down; I'd much rather have people with whom I have little in common than people who don't think it's racist to say some of the awful things I was seeing). It didn't help that the first thing I read upon booting my computer in the morning was that Cory Monteith had died, allegedly of an overdose after a much-too-brief stint in rehab earlier this year. I had a lovely lunch with

apaulled, and some other spouses. Afterward I stopped in AC Moore, then we went to pick up the kids and drove to retrieve Adam's bike, which was being repaired. In the evening we watched PBS's special on Secrets of Chatsworth, then Endeavour, which I am really liking. Have some neighborhood bunnies: 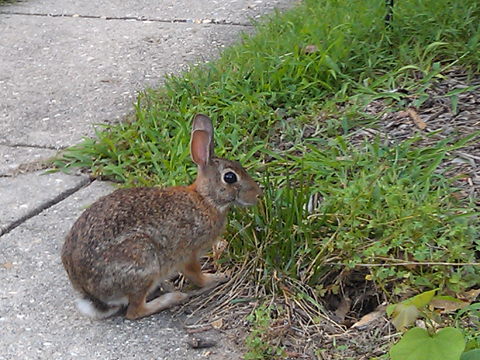