It is twelve million degrees in the DC area, though I am trying not to complain too much because I understand that it is twelve million degrees in New York, London, Miami, etc. (I am jealous of the people going to Comic-Con not only because they might get to see Hugh Jackman but because it is more than ten degrees cooler in L.A.). I have no energy in this much heat, so I did work and folded laundry (shut up, I am allowed to sing along to Les Mis when one son is visiting his girlfriend and the other has headphones on) and only went out for two quick shopping stops.

For the first time this summer I saw fawns in the neighborhood during my early-evening walk (the heat made an afternoon walk out of the question) -- a deer with two babies in the woods! Plus there were four bunnies who seemed more disturbed by lawn mowers than the heat. We had tacos for dinner, then watched the All-Star Game which we are glad the AL won, as much as we cared. The Daily Show and The Colbert Report (which allegedly broke The Daily Show last night) were both hilarious tonight. Here are some of the many hundreds of lotus blossoms at the Kenilworth Aquatic Gardens: 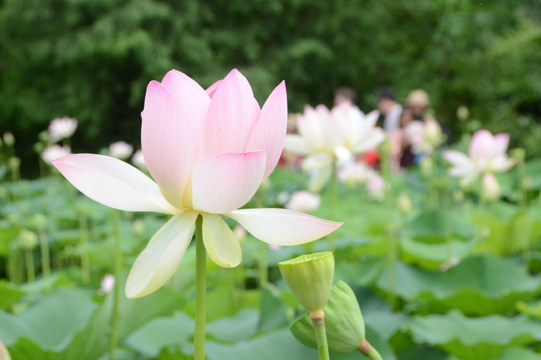