Sunday had rain forecast, and though we only got it on and off, we decided it was probably not the best day to plan outdoor activities, so after sorting trip stuff and eating leftover pizza for lunch, we picked up Maddy and went to see The Wolverine. I am neither a huge X-Men fan nor a martial arts fan, so I am probably not the ideal audience for this film, but I enjoyed it for what it was -- fast action, less gratuitous violence than the other two blockbusters I saw this summer with more substantial female characters, good acting from the leads, a couple of great chase sequences.

The plot is entirely predictable and I'm sure you've heard to stay for the credits, which have the most fun scene, but I'm not sorry I saw it in the theater and I hope a particular character returns in the next outing with Wolverine. We had dinner with my parents so Adam could tell them all about his college visits, then we dropped his girlfriend off at her house and watched the end of this season's Endeavour, which has been great, though we missed last week's episode while traveling. While I'm on a wolverine theme, here are some more photos from the University of Michigan: 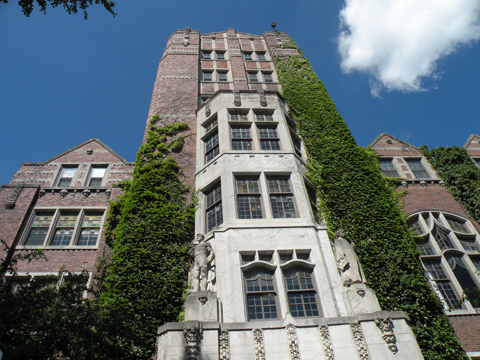