Apart from a brief trip to the food store with

apaulled in the late afternoon when we realized we had neither breakfast nor dinner foods in the house, I had a pretty quiet Monday. I had all the trip laundries to fold, so I put on One Day, which I was not expecting to be great but I was hoping I would like because it has Anne Hathaway, Jim Sturgess, and Rafe Spall, plus a few minutes of Romola Garai; I am sorry to report that the script was so bad that not even these actors whom I like could redeem it, in fact not even pretty shots of Britain and France could redeem it.

Adam had a busy day -- this week he has a calculus symposium in the mornings and cross country practice in the evenings, plus he went running and biking to the post office by himself in the early afternoon before walking the neighbor's dogs in the late afternoon. We had an electrician come in the afternoon to fix the light switch in our bedroom, which broke two weeks ago and we haven't been able to turn on the light ever since. I only saw four bunnies while walking today, but I saw the episode of Endeavour that we missed. Here are some photos from the Binghamton Zoo last week: 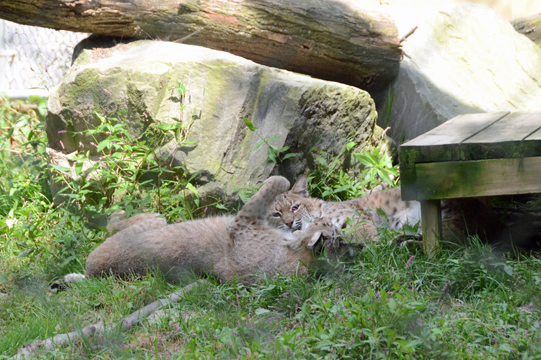