We had a perfect day in the Outer Banks! After breakfast, we took a walk on the beach to see the shorebirds (Adam saw a cownose ray in the water); then we went swimming in the warmer-than-Sunday ocean, came in and took a shower, and packed up lunch to eat at the dock where we got on a Paradise Dolphin Cruise. In addition to probably a dozen dolphins, we saw pelicans, egrets, Canada geese, osprey, cormorants, laughing and herring gulls, plus several fishing boats, a Coast Guard cutter, and a fire department boat. We could also see Bodie Island lighthouse from the cruise, so after we disembarked we drove there to see it up close without the scaffolding it had last year while it was being repaired. There were many crabs in the marsh around the lighthouse chasing each other out of holes.

We went to Plaza Azteca (not the same as the one in Bethesda -- I think it was better) for dinner where we ate 10,000 chips with excellent guacamole and salsa, then tacos and burritos, then after stops in a couple of shops, we went to Jockey Ridge to watch the sun set over Currituck Sound, which requires hiking through the park and up the largest sand dune on the East Coast. We did not see any tiny toads this year, but we did see many thousands of tadpoles in the puddles, and we saw a bunny on the park's nature walk. Since we decided we really needed to experience a North Carolina Brew-Thru, we picked up some girly wine coolers along with some fudge, and now we are feeling very mellow and somewhat sunburned. 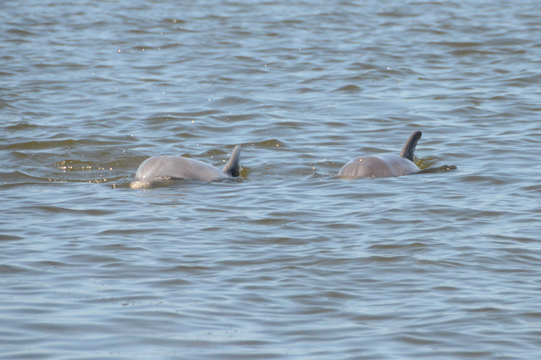