We got up early on Thursday so that we could spend time on the beach before we had to check out of our hotel in North Carolina. The water was pretty chilly so none of us did any serious swimming, though we walked along the beach watching the sandpipers and pelicans and we found shells and sand crabs in the surf. Then we went back inside to get dressed and packed, after which we drove to the Dismal Swamp State Park. It was not at all dismal when we got there, apart from the knowledge that the Dismal Swamp Canal was built by slaves who were treated terribly, but after we went to the visitor center, which is half focused on the ecology of the enormous swamp and half on the history of the region, we took a walk on the boardwalk loop and were caught in a downpour.

We did manage to see several skinks, frogs, and a fuzzy-antlered deer, though no black bears or bobcats, and we ate lunch at a covered picnic table watching boats in the canal. Then we drove to Charlottesville, where it was drizzly but pretty downtown, which I insisted on visiting before all the stores closed -- they have one store entirely devoted to cat collectibles and a New Age bookstore that sells crystals, Tarot and jewelry. It's a pretty town, some typical college shops (Urban Outfitters, Indian cotton clothing), some more unusual (kites, a Masonic bookshop) Then we came to the hotel, where younger son swam in the pool before dinner. Now we are all catching up on our email while watching the Atlanta-Cincinnati pre-season game. 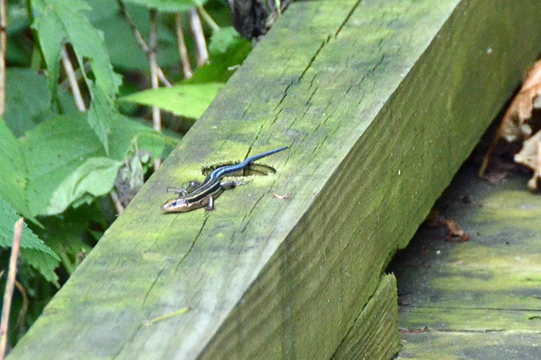