Our Monday morning did not start well -- our neighbors are having their sewer line repaired, and though the construction people say it's Pepco's fault and Pepco says it's the construction people's fault, bottom line is that a power line got cut, the power to our part of the neighborhood went out, we couldn't use our lights, computers, etc. So Daniel slept in, I went for an early walk and saw deer, and Adam went to a friend's house. Power was restored around noon, at which point Paul came home early so we could take the kids and the friend to the Montgomery County Fair since it was an unlimited-ride-with-wristband day.

While the older people were enjoying the pig races, sheep judging, and many other agricultural barns and exhibits, the younger people went on crazy rides. Unfortunately Adam's friend wasn't feeling entirely well and multiple rides left him sick to his stomach, at which point the fair staff drove him to the first aid building. He had some water and some rest and was ultimately fine; meanwhile Adam went back on crazy rides and the rest of us went to Old McDonald's barn, where the pregnant animals give birth and take care of their babies. 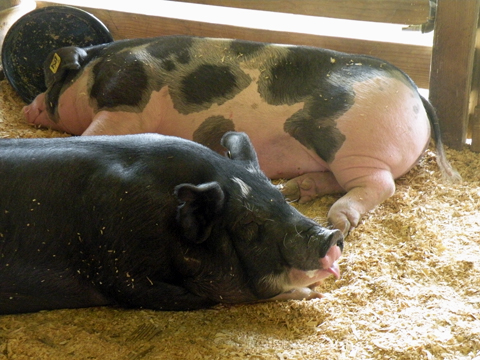 I ate relatively well for a county fair since there is a building that sells nothing but cheese, so I had cheese and grapes for lunch...plus a couple dozen cheese fries and bubble tea, then some more tea since we'd been warned to beware of dehydration. Since there were no veggie corn dogs at the fair, we had those for dinner, then watched the Yankees-Angels game while Adam went out with his recovered friend plus the friend who is visiting from Venezuela -- cross country season starts on Tuesday so he will have more scheduled hours from now till school starts.
Collapse