Monday was a running-around day, with the morning taken up by laundry and work at home, the afternoon with chauffeuring my kids around. My mother stopped by in the morning with new headphones for Daniel, which he loves because they are noise-canceling and I can't say anything to him because they are noise-canceling. After lunch I took him to the dentist while Adam was at his school's cross country tryouts, then I came home, helped Paul unpack groceries, and went to pick up Adam, who had made the team easily.

After dinner ("meatloaf" and mac and cheese), we watched Oblivion, which I liked better than I expected despite the Tom Cruise factor -- the visuals were memorable, the women's roles were passable if not really good, and though I was spoiled for the big twist, I did not find it entirely predictable. Then we caught the end of the Redskins game, which they won, though apparently RGIII and Cousins are both injured now and Grossman went 10 for 16. Here are some photos of neighborhood rabbits, taken for a change with the DSLR and not my phone: 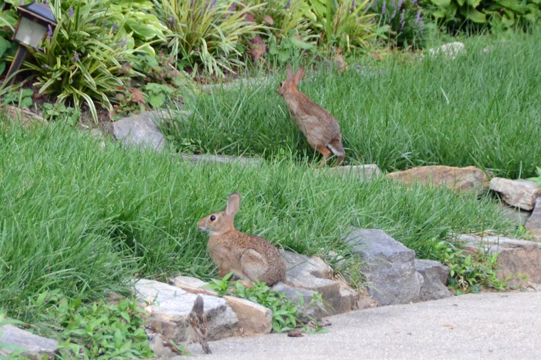