I had many places to be on Wednesday, so the best thing I can say about the day is that everything got done that needed to be done. We all got up early to drive to College Park so that Daniel could fill out the paperwork for his new position as a teaching assistant, which went more quickly than I feared it might. Since we were in and out of the engineering school offices in less than an hour, we then drove to Rockville to get Adam new running shoes and spikes for the cross country season, and since we were right near it, we went to a Chinese buffet for lunch that both the kids had been to before but I never had -- the enormous salad bar and wide range of vegetarian entrees made me very happy! Then we all went for annual checkups at the dermatologist at which he told us we had nothing serious going on (we have skin cancer all over both sides of the family, so we are paranoid about moles, though the doctor said that the biggest risk was probably certain people failing to listen to their mothers and use sunblock *cough*).

My mother texted while we were at the doctor to find out if we wanted to meet her for frozen yogurt in the mall, which we did, though we didn't stay at the mall long because Adam needed to come home to walk the neighbor's dogs because he had a dinner date. While he was out, the rest of us went to Target to get plates and stuff for Daniel's new apartment, and then we watched Broadchurch, which continues to be superbly acted and very depressing. I forgot to mention yesterday that my laundry-folding movie was The Efficiency Expert, which I put on because it was one of a very small number of Russell Crowe movies I'd never seen and it also stars Anthony Hopkins in one of his quieter, less flamboyant performances; it's about a shoe manufacturing plant in a suburb of Melbourne where treating people well is more important to the owner than profits, but he's on the verge of running out of money, and the conflict (outsourcing and downsizing versus defending the workers and their community) is still pretty timely. A few more county fair pics: 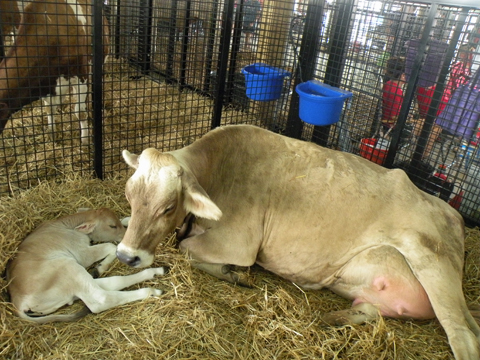