My Thursday was uneventful compared to my Wednesday. Apart from a trip to Giant and CVS with my kids for utter necessities (milk, cat food, shampoo since they've been sharing all summer and Daniel needs one to bring to college, 99-cent two-liter bottles of soda, flip-flops on sale with extra discount for $1.10), I stayed near home, got work done, waved at bunnies as I walked by, saw Adam off to cross country practice, nervously introduced the cats to healthier food which apparently met with their approval.

My parents invited us over for dinner since they won't be around Friday and Daniel is moving back to College Park over the weekend. We had Italian food and watched the Nationals try very hard to lose to the Cubs before coming back to win in 13 (the Ravens tried even harder to lose to the Panthers and succeeded, but it's preseason so no big deal). We also watched the South Park movie with older son; none of us had seen the whole thing before and I am still snickering at the musical numbers.

Here are a few more photos of what will probably be our last visit to DC's branch of the National Aquarium, the oldest public aquarium in the U.S., which is closing next month when the Commerce Department, which houses it, begins renovations. The National Zoo is getting three elephants from the Calgary Zoo, just had two tiger cubs, and may have a pregnant panda, but we are still sad that the aquarium is likely leaving DC forever, since the animals will all be sent to live elsewhere. 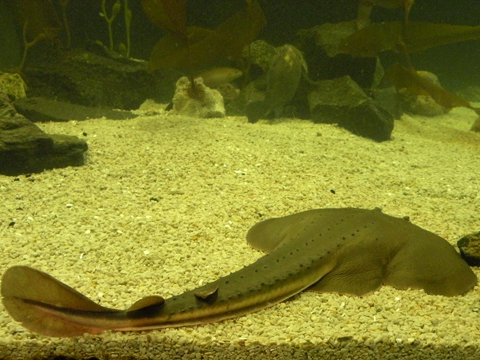