Our morning was spent doing chores -- Adam had to get forms signed for school, Daniel needed his new linens washed, things like that. Then, since it was Daniel's last full day at home, we all went out to Minerva for Indian buffet for lunch and ate lots -- they had more vegetarian choices than ever before, plus Tandoori eggs. After a couple of shopping stops, we went to hike to the river at Scotts Run, having realized that we might not be able to get everyone there in the fall for the annual family photo and wanting to do it while we had the opportunity, even if it will have greener leaves than usual! 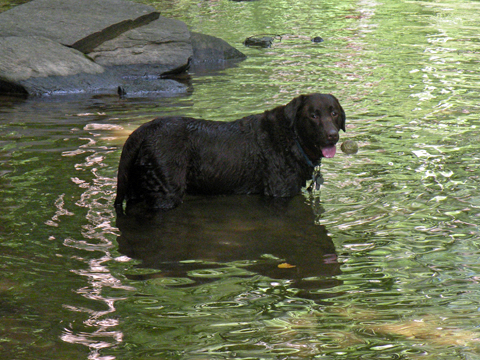 We came home and watched the end of the Saints-Texans game, sent Adam off to go swimming with a friend since he'd finished his summer homework, and had a small dinner since we were all still full from lunch. Then we put on the VMA Awards -- Daniel wanted to see Daft Punk, I wanted to see N'Sync, Paul wanted to see what was the silliest performance -- but after Miley Cyrus and the bears, we couldn't take any more and switched to this week's episode of The White Queen (wow it's hard not to hate Margaret), then the end of the 49ers-Vikings game. We did not see the Orioles win or the Nationals lose!
Collapse