Wednesday mostly involved more chores and the rain made me sluggish; there must have been a front moving through because my head was groggy all day. Given that Adam had an afternoon track meet and was eventually going to need a ride home, I did not get downtown for the march, though I watched on and off on the news. I did get the laundry folded (and watched Russell Crowe's episode of Republic of Doyle with his Merry Men, which I have since learned has also had Paul Gross in a guest role, so I need to track that down too).

We had Italian "sausage" and white beans for dinner, which was yummy, then we all ran out to CVS because we had several coupons and Adam needed notebooks for school, plus Shout to get out the stains his bike chain left in his pants. After he went to do calculus, we watched Broadchurch, which is really making me miss my nighttime sanity hour with Stewart and Colbert -- they better be back next week. Here are some pictures from last April of the tulips at Brookside Gardens that I found while I was uploading summer photos to Flickr: 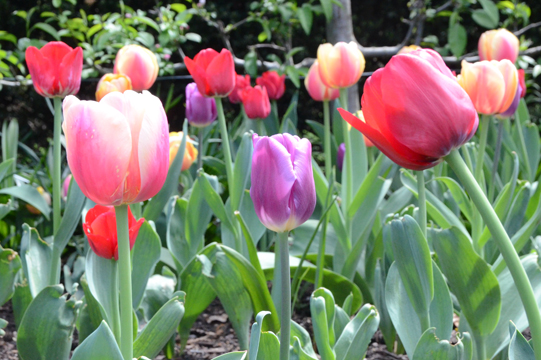