Another quickie after another long but good day wallowing in the past, this time at the Maryland Renaissance Festival, where my family met

dementordelta and went to see the O'Danny Duo, the Dueling Fools, Johnny Fox the Sword Swallower, Orlando Furioso, the Squire of the Wire, and Fight School, plus the elephants, camels, reptiles, and ponies (we did not sit and watch The Rogues but we certainly heard them). I ate fruit and cheese and Italian ices in an orange, and managed not to get as dehydrated as on Sunday though apparently I have poison ivy on my leg from somewhere, urgh. Here is King Henry VIII at a moment when his court was not occupying his attention: 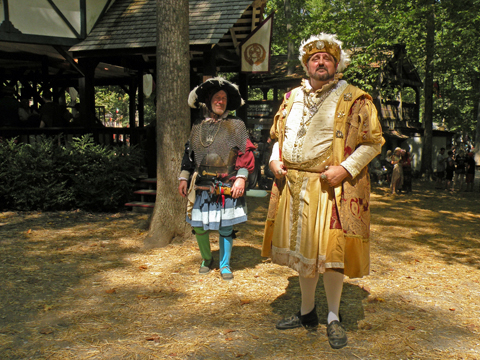 Our return was complicated first by the fact that a small plane had crashed on the major highway connecting Annapolis to the Beltway, then -- once we got past the traffic the accident caused and stopped at a food store for Daniel -- the discovery that Daniel had left his keys at our house. So we brought him home to retrieve them, had some ravioli since it was after 7 p.m., and returned him to College Park. So I am behind on everything again and not caught up from Sunday either. Apart from the fact that the Orioles won today, I don't even know what happened in sports this weekend be it baseball, football, or the U.S. Open, besides Nyad's swim which is fantastic!
Collapse