Sunday was as gorgeous a day as Saturday and younger son did not have cross country in the morning, so we got up early and went to the Boonesborough Days festival, the big craft-and-food fair in Washington County, which is awesome because it's free admission and pretty much all MD-VA-WV-PA vendors so everything is reasonably priced and locally sourced. We always go look for the honey vendors, who bring some of their bees with them, and the caramel corn, plus there's lots of affordable jewelry, woodcrafts, handmade purses/bags/quilts, and homemade soaps/perfumes. Most of the food is made and sold by local churches and civic organizations. From there we went to South Mountain Creamery, where we visited the calves and chickens before getting ice cream and lots of cheese to bring home. Some pictures: 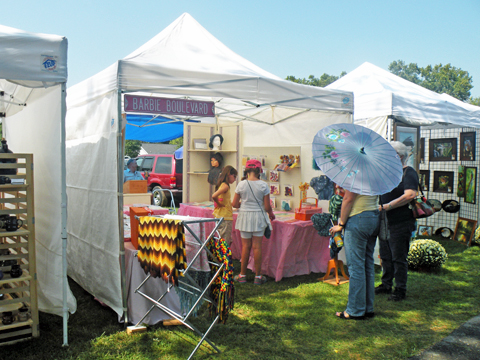 I am totally not ready for it to be fall, but at the same time it was fun to see all the Halloween crafts at the festival and I'm really not sorry it's football season even if it's currently politically incorrect to admit that I like to watch football. The Ravens blew their opening game on Thursday night and the Redskins play on Monday night, so we followed other teams -- we watched the end of the Green Bay game, then watched the entirety of the very messy Giants-Dallas game, which gave me hope that the Redskins could win the NFC East if RGIII can stay on his feet (again my policy is Anyone But Vick, even if it's Romo). We also put on the very end of the Orioles game when they had the bases loaded at the bottom of the 9th, but they managed to lose anyway, woe! At least the Nats won, and Serena won. Maybe Adam will win Monday at the Woodward Relays!
Collapse