It was quite hot in Maryland today, so much so that Baltimore closed its public schools early and the University of Maryland warned students that if they didn't use less AC and fewer computers, they might have a blackout. So I stayed indoors till nearly dusk working on various projects, none of which got completely finished but all of which moved forward. It was so hot that I did not see a single bunny, though I saw a deer and fawn in the woods.

Adam came home from a cross country meet and worked on his college applications -- all the state schools have rolling admission, so the earlier the forms are received, the earlier he will be considered. He says he is frustrated because when you play Runescape, you can do your quests one at a time, so you can do Retaking The S.A.T. and THEN do Applying To College, plus put both quests on hold so you can Fill Out Honor Society Forms.

After dinner we started to watch the Orioles game, which appeared to be going pretty well, but as has happened too many times this month to recall, the bullpen collapsed and the Yankees won. Fortunately we missed this because we were watching Broadchurch which is much more horrifying and depressing though really well acted -- Colman, Tennant, and Whittaker in particular. A few last photos from the festival in Boonsboro last weekend: 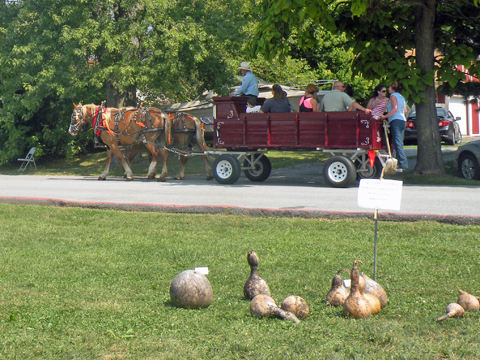