The big story all over the region today were the enormous thunderstorms that spent two hours making it look like a hurricane was passing through -- tree branches coming down, hail mixed in with the pouring rain, lots of lightning, thunder that sent the cats hiding. I left my computer off after the second time the power flickered, so I did not get a great deal accomplished, plus I ended up picking son up from school since there was no way I was letting him bike home in that weather and took him to get a signature on one of his application forms.

The Orioles did not play until evening and managed YET AGAIN to blow it in the ninth to the Yankees (the Nationals were playing in New York and managed to beat the Mets). We put on the Patriots-Jets game, which was fun mostly because their weather was nearly as bad as ours for a while and it was very messy. Then we watched The Daily Show and now Hugh Jackman is on The Tonight Show, which is one of few reasons I would ever watch Leno. The bunnies were unfazed by the wet grass, probably happy because we needed the rain, so here they are: 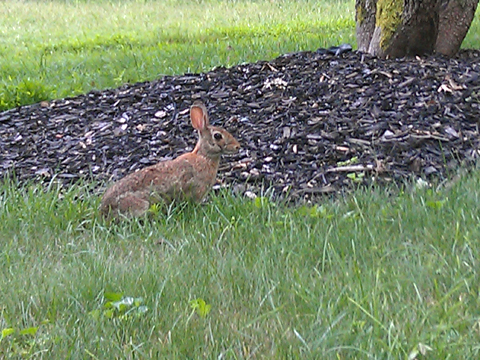