Rather than whine, I will keep this short. (I don't get around to blogging till after 10 p.m., at which point the Dayquil has worn off but it's too early to take Nyquil.) I did not talk like a pirate because I didn't have a lot of voice in general, and I did not go into a sukkah because it would have required that I breathe on other people. I did celebrate the Lunar Festival, mostly because Adam had insisted that we get moon cakes and Paul made Chinese food for dinner (these pics are from Great Wall grocery store on Wednesday -- I was very amused by the amount of Hello Kitty merchandise): 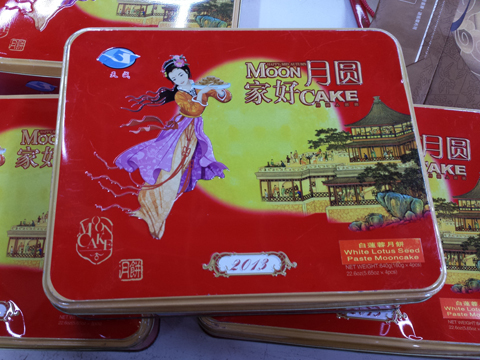 Adam and Maddy ate the Chinese food with us -- I got this cold from them, so was not worried about infecting them -- then went to Club Night at their school to recruit photography club members. We watched part of the Eagles-Chiefs game, then put on last season's finale of Elementary which we've been recording from On Demand but that one hasn't been on -- I am psyched for new episodes next week. The Orioles did not manage to sweep the Red Sox, which is a shame, but it's even more important they beat the Rays in the upcoming series, and the Nationals won, which will make many local people happy.
Collapse