We had rain most of Saturday, which didn't really bother me as I wasn't feeling up to long hikes or anything. Adam had to get up insanely early to go to the Oatlands Invitational, where he ran pretty well and was happy with his time despite being up late the night before at a concert. After lunch, Paul and I went to the Huckleberry Fine Arts Gallery in Bethesda to meet surrealist painter Rob Gonsalves, whose work we have long admired; it wasn't very crowded while we were there, since they were having a wine and cheese reception a few hours later, so we got to talk to him and have him sign our books (he'll be there Sunday too if anyone is interested): 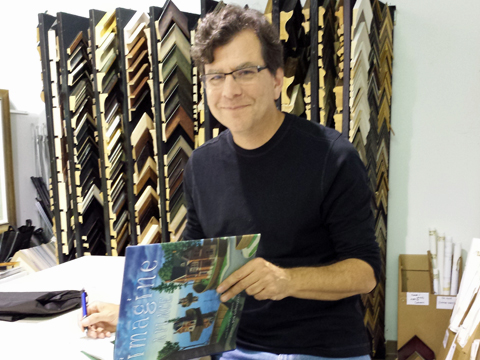 We all had dinner together and were visited by the person who coordinates the Washington Folk Festival, whose signature was the final item Adam needed to complete his National Honor Society application (it's as competitive here as a college application and a lot of volunteer work is expected). Then we watched this week's episode of The White Queen -- oh, Margaret, you're going to kill the princes in the Tower, aren't you -- and the first episode of Masters of Sex, which is very well-acted (though why does Michael Sheen so often play awkward nerds when he's, well, Michael Sheen?). It has about as much nudity as Game of Thrones but the sex is less gratuitous, anyway!
Collapse