Paul and I spent nearly all of Sunday at the Maryland Renaissance Festival, having planned to come this weekend to see the Mediaeval Baebes while they were at the faire. We went to all three of their sets, which were gorgeous, plus we saw Deborah Rose twice since she was alternating on the stage with them and we were saving our seats; her music is more generic Celtic, more Chloe Agnew than Loreena McKennitt (being snarky about the length of the latter's "Lady of Shalott" was probably not wise with this crowd), but her voice is very pretty and she had great accompanists.

Our other reasons for going this weekend were that Barely Balanced was there, which they weren't several weeks ago -- they have several new juggling and hula hoop stunts and their acrobatics are always amazing, though their jokes about how Cameron can't get a date even though he's now engaged to Margret haven't changed. We also went to see Shakespeare's Skum since we ran out of time for them a few weeks ago (tag-team Romeo and Juliet -- small children in front of us pretending to get the dirty jokes), and we met King Henry and Queen Katherine briefly too. 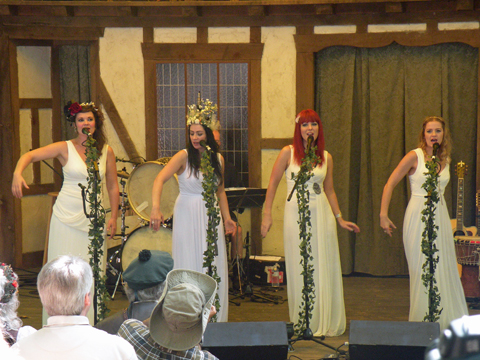 The faire was the most crowded that I have ever seen it, particularly the first two Baebes sets though pretty much every show looked to be standing room only, and I did not eat a ridiculous amount apart from the chocolate-covered cheesecake. So when we got home, we got pizza for ourselves and Adam who had spent all afternoon studying and doing homework. Then we watched the season premiere of Once Upon a Time, which was okay (I like Evil so much better than Good here). Let's not talk about the Ravens game, since we missed it anyway; hey, the Redskins won!
Collapse