Younger son took the SAT on Saturday morning (he'd taken it before, but he wanted to get his verbal score from good to near-perfect). Since they weren't administering the test at his high school, he took it at older son's high school in Silver Spring, and by the time he and his friend had been dismissed and gotten home, it was nearly 2 p.m. I thought I would distract myself with the MD-FSU game, but let's never mention it again -- hey, at least the Terps can never again lose by the biggest margin in the ACC after this year because they will no longer be in the ACC! We all had lunch and went to Locust Grove to see whether the trees were changing yet, which they are, even though it was over 80 degrees in the afternoon. 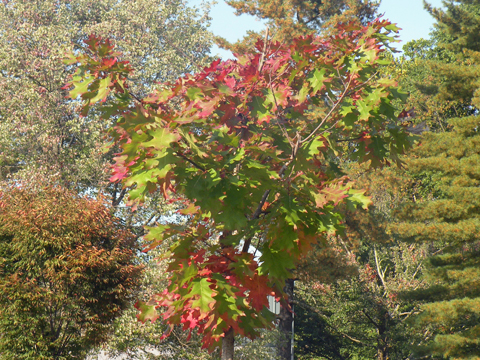 We had planned to have dinner with the whole family and out of town friends who didn't come because of the sequester, but we told Daniel we'd take him out to dinner anyway, so we went to Noodles & Co. in College Park with him while Adam was having dinner with his girlfriend, who took the SAT2 this morning. After we ate, we took Daniel food shopping -- I stopped in Best Buy next door to Shoppers Food Warehouse and found X-Men Origins: Wolverine for under $5 -- dropped him off, came home and watched The White Queen (which is doing a fine job making me hate ALL the characters, including the women) and eventually retrieved Adam. I put on the Wolverine DVD to make sure it worked, and now we are watching that!
Collapse