We had pouring rain and a tornado watch from morning till nearly dusk, so I had a quiet Monday, which was fine after my busy Sunday. To recap, we went to Annapolis after lunch, where we parked above the monuments and shopping district where we intended to eat dinner, then walked to the waterfront, stopping to visit various stores (there's one that sells alpaca woolens, one that sells maps carved onto wooden clocks and trays, one that's all Christmas ornaments, all year, and numerous shops devoted to Navy items, nautical items, and pirate items). We couldn't walk around the marina because there was a power boat show that had it closed off on one side and the Naval Academy is affected by the shutdown so its museums and public areas are closed as well, but we got to see a bunch of the boats.

Then we went to Lemongrass for Thai food (they will make any of their curries with tofu instead of meat, so we got to have kaeng khiao wan and Massaman curry, both of which were excellent, and walked through the monthly craft fair during the last hour it was open, though I spent all my time admiring jewelry and glass art and didn't actually buy anything. We walked past the governor's mansion (we could hear O'Malley's kids yelling and chasing each other in the yard) and the state house, plus the Thurgood Marshall statue and various state and county office buildings. Then we went to the Ram's Head Tavern, where we had coffee and hot chocolate (mine might have had peppermint schnapps in it) and saw Vienna Teng and Alex Wong. I like the former but he was very talky and I was not in the mood to hear about his process! 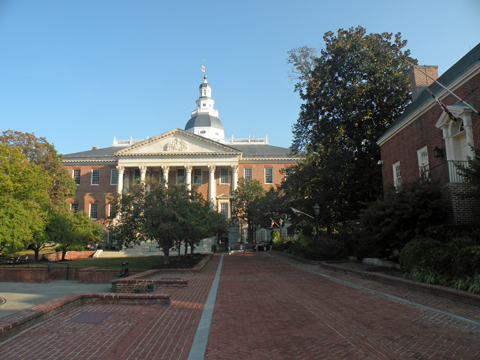 Vienna Teng was, as always, fantastic. She opened with "Whatever You Want" and "Blue Caravan" and did a solo version of "The Hymn of Acxiom" with herself as backup on her vocal synthesizer, which was a surprisingly decent replacement for the choir, plus she did "Copenhagen" with herself, Alex, and Jordan Hamlin playing plastic cups. Jordan played the French horn on "Antebellum." Vienna mostly played music from her new album, but she asked for requests for older songs and played a mashup of "Harbor" and "City Hall" that was awesome (she told everyone to sing along on the latter). She closed with "Grandmother Song" (encouraging audience heckling) and did "Soon Love Soon" with backup harmony recruited from the audience.

The only song I really don't like off her new album, "In the 99," she said was inspired by Kanye West, which explains a lot...you know that shudder you feel when an artist you love goes experimental and you want them to grow as an artist, but not change so they're unrecognizable? That's how I felt when I first heard it. At least most of the album does not sound like "let me see how I can sound like one of the cool kids" so much. Speaking of not changing too much, I may skip the rest of the new season of Downton, we caught up on Once Upon a Time (go Team Villains) and Masters of Sex (go Virginia), plus we watched tonight's season premiere of Beauty and the Beast which I HATE being on against Sleepy Hollow so don't spoil me! It was kind of all over the place but I still love Chandler and I'll keep watching for as long as she's awesome.
Collapse