I am SO FREAKIN' TIRED of coughing. I keep saying "by the end of the week..." but I'm only coughing, nothing else, no sinus pain or stuffy nose or sore throat beyond feeling raw from coughing and it's not in my chest, so I keep feeling like there is no point in going to the doctor, but any time I drink something hot or breathe too deeply in the woods -- which are currently full of excited chipmunks and squirrels, while the Halloween-bedecked neighbor's lawns had two bunnies and a frog today -- I start coughing uncontrollably. DO NOT LIKE. Also, I keep burning my tongue on the soup that's supposed to be curing me and I never want a eucalyptus cough drop again, but we're out of the honey ones.

Other news was good today. Adam texted me from school to tell me that he'd been invited to a reception for the National Merit commended students who had just been sent their certificates, plus he got into the National Arts Honor Society (he's already in the English and Chinese honor societies). Agents of S.H.I.E.L.D. was meh (witty banter between two characters who have absolutely no chemistry falls very flat) and it was a bad idea to catch up on this week's better Sleepy Hollow right afterward (re: the Boston Tea Party, from the perspective of a participant in the raid: "You've coined a far more festive name for it"). The much-ballyhooed Whedon could take a lesson there in sisters doing it for themselves. 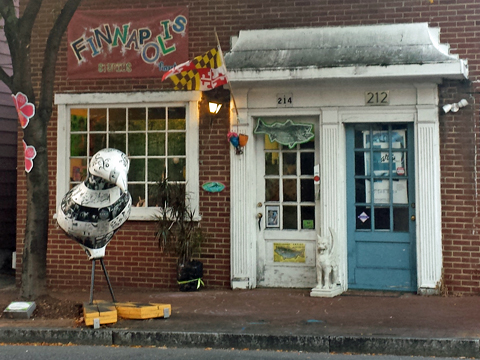