We had rain all night last night and it's still raining now, the remains of the tropical storm plus whatever's moving in from the north and west. Rather than drive in it after waking up to several alerts about crashes on the Beltway and the highways to Baltimore, I worked from home and stayed where it was warm, plus I tried to clean out the bathroom where one of the cat litterboxes is because I discovered that the sink vanity is stained. Clearly we need plastic there. I finally got enough Viggle points for a Barnes & Noble gift certificate, so I ordered the second and third seasons of Avatar: The Last Airbender which I've wanted for ages (I watched parts of them with

cidercupcakes). Though Viggle is driving me nuts with its must-watch ads that interrupt TV shows, so I think I'm going to stop using it.

We watched the premiere of Once Upon a Time in Wonderland, which I really wanted to like -- I love Alice, and I loved her on the show -- but it feels so entirely derivative of the show from which it spins off plus Tim Burton's movie that I'm not sure I will like it enough to stick with it. Then we watched The Crazy Ones, which I am not even sure I could summarize; I will always love Williams and Gellar but the weird flirty father-daughter dynamic isn't working for me. At least on Thursdays we get Elementary, which continues to be excellent on pretty much every level. Friday is Adam's homecoming football game and Paul and I are going to College Park to watch Daniel be honored for having the top project in his College Park Scholars program last year! Some Annapolis pics from Sunday: 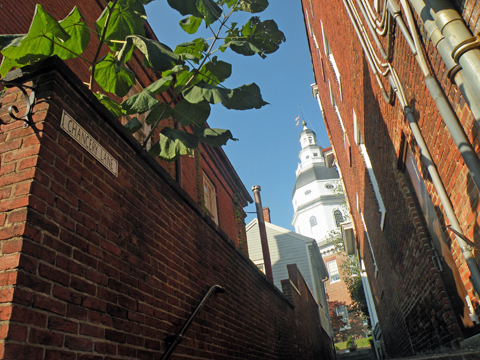