The sun was out all afternoon on Monday! After not having seen it for nearly a week, I was starting to get seasonal affective disorder weeks early (and I bet I needed the Vitamin D). I had lots of work and chores to get done in the house, but I went out twice for walks -- our neighborhood is still full of active squirrels and chipmunks, though I only saw one bunny and the deer must have been elsewhere. I did not do anything to celebrate either Columbus Day or Canadian Thanksgiving besides enjoy the turning leaves.

Adam was finishing his Common App essay, which I proofread for him (we had a debate about whether "it sucked" was too colloquial for a college essay; I believe he finally agreed to take it out). Mondays are now Dilemma Night since Sleepy Hollow and Beauty and the Beast are on at the same freakin' time! Paul wanted to watch the former, so we watched that when it aired and will catch up with the latter On Demand tomorrow. Some pics of our turtle encounter at Lake Needwood on Saturday: 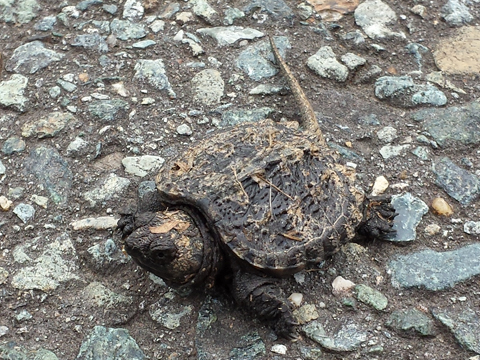