Still catching up on lots of stuff. There was an early morning at my local CVS, which I took as a good enough reason not to run out today for mouthwash. Paul dropped off the van for routine maintenance and jogged home, then worked from home for the rest of the day, so I had company for lunch, which was nice. Adam decided that he wanted to attend the last cross country team spaghetti dinner for the season even though he isn't going to regionals, so he wasn't home much after school and practice, then he disappeared to make Halloween plans. We had our own spaghetti dinner without him and caught up on Elementary.

In all the chaos of the weekend, we seem to have waited too long to get a pumpkin to carve -- the fruit stand was completely out, as were two grocery stores and the garden store. I am not sure what we're going to do about that. Our neighborhood is having its annual Halloween party in the late afternoon but I think Adam (whose girlfriend is wearing a matching squid costume) may already be headed to hang out with her. I looked at the early decorations and saw several deer sniffing around them in the evening. We watched Nashville, then the Red Sox winning the World Series, so that's all good. Some Meadowside Nature Center pics from earlier in October: 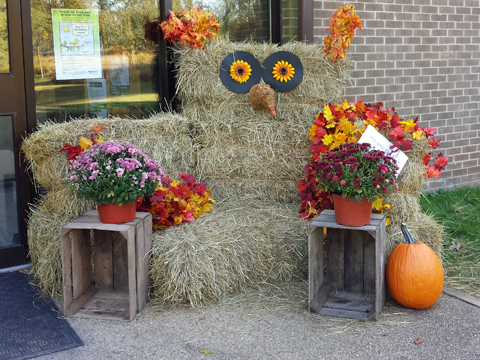