I do not like Eastern Standard Time. I don't care how dark it is in the morning, I'm not a morning person no matter what, but when it's dark in the early evening and eventually the late afternoon, I get depressed. I had piles of in-the-house stuff to get done on Monday, and it was chilly outside, and it was chilly inside, and although cold weather itself does not bother me, I want my light back. I did a bunch of work and a bunch of laundry and, having taken apart a vintage Winnie the Pooh bracelet last week so I could put the charms on a more colorful charm bracelet, I put Barbie shoes and lots of pink on the leftover gold-tone bracelet, so I feel accomplished.

We had Indian food for dinner for Diwali, and Paul tried to make parkin cake for Bonfire Night on Tuesday, but the cake somehow overflowed the pan in the oven and we ended up with burnt cake and a house full of smoke! We'll have to console ourselves with traditional British alcohol. I remembered to post on Facebook but keep forgetting to post here my two favorite bits of Les Mis goofiness that surfaced recently, the Sesame Street and Animaniacs versions. Here are some photos from our local fruit stand which closed for the winter on Halloween, so the pics are already a bit out of season, but I wanted to post them before they're completely out of season: 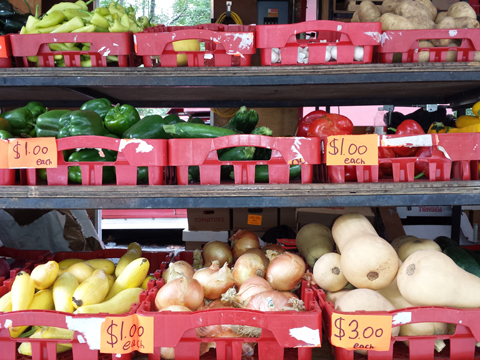