Pardon my distraction, I'm still following local Virginia elections and the attorney general's office looks like it may come down to absentee ballots because at the moment there are only a few hundred votes separating the candidates. For the most part, it's been a good evening and I don't just mean because I had one more Almond Joy left over from Halloween. De Blasio won in New York. McAuliffe and Northam won in Virginia (yes I know he's a sleazebag but look at the alternative). Christie won in New Jersey, which several people I know in New Jersey are not happy about, but Christie doesn't scare me nearly as much as Cuccinelli. And Illinois celebrated Election Day by legalizing gay marriage. Do I thank the Tea Party for wrecking the GOP or hope for a sane two-party system to return?

Maryland's elections were for mayors of cities in which I don't live, though Takoma Park has voted to let 16-year-olds vote in municipal elections, which is great. It was another magnificent autumn day and I had chores to do on Rockville Pike; when I mentioned this to my father, he offered to take me to lunch, so we went to Ambrosia, from which I walked to AC Moore; then I checked World Market to see if they had replacement Bonfire Night desserts for the burnt parkin cake (Paul made gingerbread instead) and stopped at Ulta for shampoo. We watched Agents of SHIELD, which -- already, really, that gimmick? -- and caught up on Sleepy Hollow, which I like so much better, even in flashback. Here are some Gettysburg pics that I didn't have time to edit: 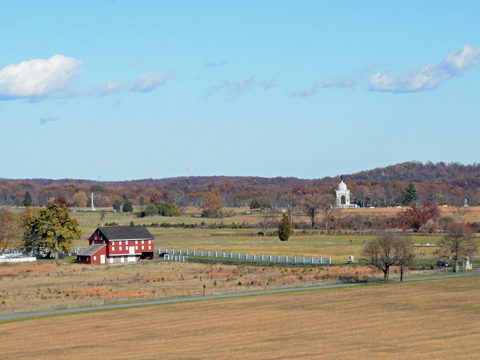