I had another lovely day with

dementordelta, starting with sleeping late and watching some Arrested Development over breakfast. Then we went to Washington Hebrew Congregation's annual holiday boutique at the building where younger son works on Sundays with my mother, where we saw my mom and several friends, and looked at lots of pretty jewelry, bags, and yummy stuff (olive oil, double chocolate cheesecake). From there we went to Ambrosia for Greek food for lunch (spanakopita, spicy feta, grape leaves). And then we went back to my house to pick up

apaulled so we could meet

wolfshark and her hubby, and

artemis_prime and her hubby so we could all see Thor: The Dark World together at Washingtonian, where the trees have more leaves than in my neighborhood so we got a few minutes of admiring the geese in a lake surrounded by red and gold.

Back at home we were still very full from lunch, so we nibbled some nuts that Delta brought and watched a couple more Arrested Development episodes before she had to drive home. I ate half a veggie burger for dinner, tried to catch up on e-mail (though that's going to take a couple of days) and watched Sleepy Hollow, which remains completely awesome -- ( Collapse ) Colbert just insisted that Batman and Robin are gay, so that seems like a good comic book note to end on. Here are a few pics of the Brookside chrysanthemum show, more later! 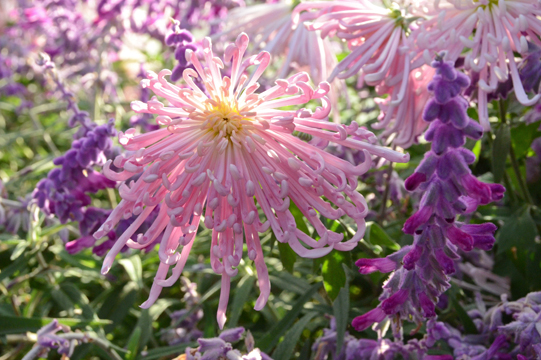