It was warmer but also gloomier on Sunday than Saturday -- I don't think the sun came out once, though we only got a bit of rain overnight and our weather has been nothing like the scary stuff that tore through Chicago and delayed the Ravens-Bears game for almost two hours (hope everyone and their loved ones are okay). Since Adam was working at Hebrew school in the morning and had homework to get done in the afternoon, we stuck pretty close to home and went to Great Falls, the Maryland side. There aren't a lot of leaves left on the trees, but the ducks are still there, and we saw a slug who was pretty active for, well, a slug, plus one swimming turtle plus several flying turkey vultures though regrettably I didn't get photos of the latter two: 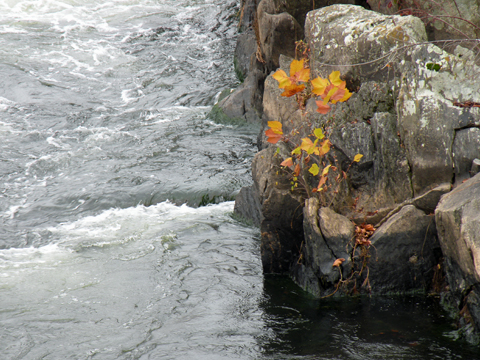 I almost never read Holocaust-themed novels and my tolerance for book group type analysis is extremely low these days, but I had decided to read The Book Thief after spoiling myself to make sure I could tolerate the movie. In many ways it did not sound at all like a typical Holocaust story, so I spent the late afternoon finishing it, regretting that there was no way to make some of the drawings bigger on the Kindle but appreciating it very much otherwise (and not sorry to have Roger Allam and Geoffrey Rush play certain characters in my head). We postponed Once Upon a Time to watch the first, quite good episode of Almost Human, then we watched this week's always-excellent Masters of Sex. Let's not even talk about football scores, hmm?
Collapse