I had a busy but mostly good Friday. I spent the morning finishing a review of Deep Space Nine's "By Inferno's Light", one of the many episodes that was pretty good when it first aired and has somehow become better during the past 15+ years. My father invited me to lunch, but I had to get the review ready for posting, so I just ate oatmeal and cheese; then I went for a walk (too early for bunnies and deer, I didn't see those until we drove home after dark) and took a quick shower so I could take Adam to the orthopedist, where he was poked and prodded all around his left knee. She suspects that he has tendonitis and prescribed physical therapy; if a few weeks of that don't make the pain stop, then we have to talk about MRIs and injections.

Adam and his girlfriend had plans in the evening -- in typical teenage fashion, they did not have a set agenda or time, though they needed a ride -- so when we got back and she asked if he'd meet her at the mall, we told my parents that we were heading there, and we ended up having dinner at California Pizza Kitchen with my parents while Adam and Maddy ate elsewhere in the restaurant. Then we came home and watched Doctor Who Explained, which was good, and An Adventure in Time and Space, which was fantastic; I have never seen the First Doctor except in clips, and I was expecting a straightforward docudrama about TV production, so my delight at seeing in essence a Doctor Who episode about the making of Doctor Who is pretty significant!

A few photos of candy dish-making at Art of Fire during the fall Countryside Artisans Tour: 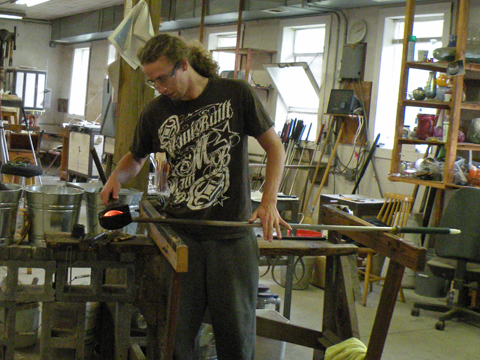