On Sunday we did what we had intended to do on Saturday and went to Frederick County to various farms and venues. Since Frederick Museums by Candlelight was only on Saturday, we missed the Brunswick Museum this year, but the snow that kept us away was still on the ground, so the farms and mountains were very scenic. We started at the Frederick County Society of Model Engineers display, where we met up with Paul's parents, then went to Kiparoo Farm, where the sheep were braving the cold and we ate cookies and bought yarn.

From there we drove to South Mountain Creamery, since we were out of egg nog and muenster cheese and since we always like to visit the calf barn (in this weather the chickens were hiding in the rafters, too). By then the sun was setting, so we got to see the War Correspondents Arch at Gathland at twilight surrounded by snow. We got to Brunswick at dusk, after the antique stores had closed, but we knew that Beans in the Belfry was open, so we had dinner there in the converted church (panini, hot chocolate, stollen for dessert). 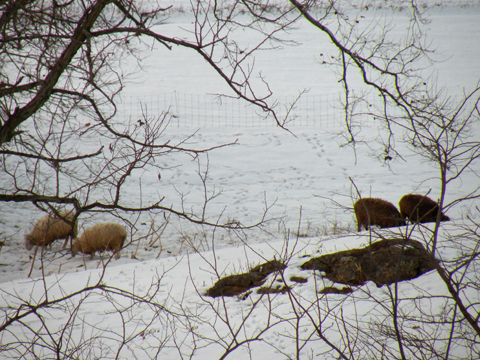 We arrived home in time for Adam to finish his English project and for me to watch Once Upon a Time (certain characters had better return after the break or I will NOT return) and the Masters of Sex season finale (which had better return, period). Then we watched the news because it figures that while I was up in Frederick, Hugh Jackman was at the National Zoo and the National Building Museum downtown and I didn't see him except on Instagram -- I am a failure as a fangirl. Farewell Peter O'Toole and Joan Fontaine.
Collapse