I did very little boxing on Boxing Day, though it's not like we had holiday decorations to take down. Instead we spent the morning getting organized from traveling, then went to see The Desolation of Smaug. I don't have any deep and profound thoughts on it -- it's been too long since I reread The Hobbit, which I never liked as much as The Lord of the Rings, and anyway the movies are so different that they're more like fan fiction than definitive adaptations. Does it make me a bad fan if my overriding feeling is relief that it's so much more engaging than An Unexpected Journey? I loved Tauriel completely and most of my favorite parts of the movie involved her, though I nearly fell asleep during Gandalf's private quest, and while I loved the waterfall chase, it went on too long and some of the visuals did not look up to par, though Lake-town and Erebor were nicely done. Considering that the movie is supposed to be about the hobbit, I feel like Thorin gets more screen time. 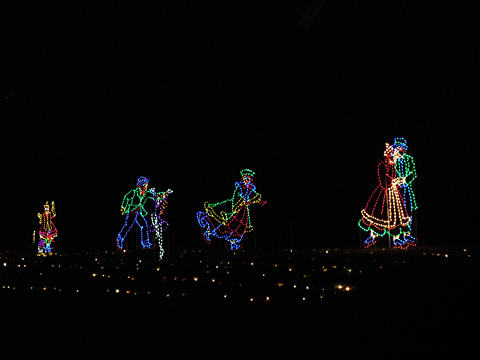 We went to the movies in Germantown at a theater we very rarely visit -- I think the last time was Elizabeth: The Golden Age, for the same reason -- it's not far from Seneca Creek State Park, where Gaithersburg's drive-through winter lights show is still going on. There are always a bunch of new displays or old displays in new configurations (this year one was a bunch of beavers gnawing down a Christmas tree, heh). It's not quite as scenic with no snow on the ground but there's also less glare through the windows. We got home pretty late for dinner and Adam went to work on a couple of college essays (Wisconsin invited him to apply directly to the business school, Indiana invited him to apply for more scholarships than the one they offered, and Syracuse requires extra essays for their marketing-communications program). The rest of us watched A Beautiful Mind at

dementordelta's suggestion and Daniel tried to explain the math to me, unsuccessfully!
Collapse