It was warmer on Friday and extremely sunny. We had a relatively quiet morning that involved a Reddit vs Tumblr debate and may have involved eating chocolate-covered toffee. Then we drove down River Road first to Riley's Lock, then to Violette's Lock, where in both places we walked under the trees along the somewhat muddy canal towpath and saw the sun gleaming on the Potomac. It must have been too cold for turtles, but we also saw herons, ducks, and lots of other birds at both parks: 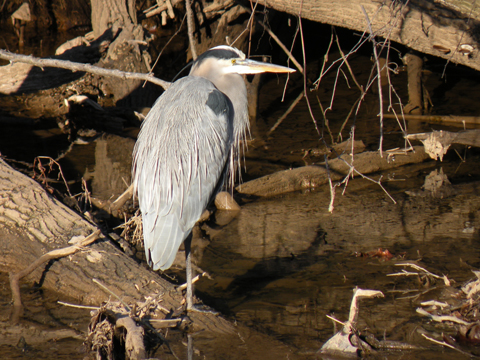 After a stop at a food store, we came home, did various chores, and went to dinner at my parents' where my mother made chocolate roll for dessert. We were going to watch the Nikita series finale but realized we really needed to catch up on last week's episode first, so we watched Reign of Fire, which holds up pretty well, even the special effects -- the cast is much better than the script, but Bale, Butler, McConaughey, and Scorupco give their all, and it's fun to see Siddig, Krige, and Gleeson.
Collapse