It was chilly on the last day of 2013 but too pretty out to stay indoors. We thought about going to Mount Vernon, but there was a big festival going on in Alexandria that we figured would cause a lot of traffic, so instead we went hiking for Great Falls. After all the rain over the weekend, the Potomac River was the highest we've seen it since just after Hurricane Isabel, and the sunlight was very intense. It wasn't warm enough for turtles, but we saw geese and ducks, plus lots of smaller birds, more than people in most spots. On the way home we stopped at the Bethesda Co-op for supplies, since we intended to have cheese fondue for the last dinner of the year. 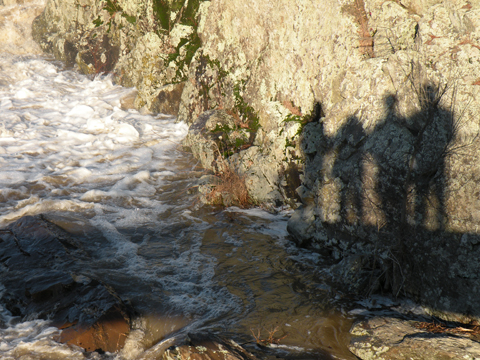 Someone on freecycle was offering The Forbidden Kingdom and Airplane II; since we didn't have the latter on DVD, we went to pick that up and ended up watching it and laughing our asses off after dinner ("there are literally hundreds and thousands of blinking, beeping, and flashing lights"). We did not intend to watch the Duke-Texas A&M game because I don't want to support Chick-fil-a, but we couldn't handle Ryan Seacrest for two hours, so we put on the Former Peach Bowl instead. It was a fantastic game except for the fact that Duke didn't win. Eventually we did put on New Year's Rockin' Eve though thankfully we missed Miley. Happy New Year!
Collapse